Flooding in the South Island has prompted New Zealand’s largest artificial breeding company to fly-in bull semen to some farms. 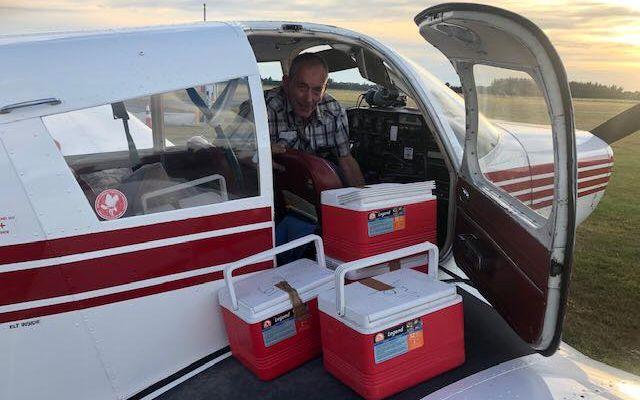 LIC deliveries of bull semen are being flown in to farmers cut off by severe flooding over the weekend in Canterbury.
Photo: Supplied / LIC

The critical mating period is underway on most of the country’s dairy farms, but heavy rain, slips and floodwaters in the West Coast and South Canterbury have made it difficult to reach a number farms and get the cows in-calf.

Due to the tough conditions, LIC, the largest supplier of artificial breeding services to dairy farms in the country, has been using small planes and helicopters to make sure semen straws are still delivered to farmers on time.

LIC’s artificial breeding manager David Hale said it understood the importance of delivering semen to all farms on schedule, regardless of weather conditions.

“The dairy cow cycle takes roughly between 18-24 days. If insemination doesn’t occur at the right time during that cycle, it means a three week wait until the cow is in heat again.

“This three week loss can have a number of negative flow-on effects for farmers, including the potential loss of three weeks’ worth of milk supply and an impact on calving periods the following year,” David Hale said.

Hale said a Cessna plane was used by LIC to successfully deliver around 3300 straws of semen between Timaru and Ashburton. An additional 500 semen straws have been delivered via helicopter to affected farms on the West Coast.

He said LIC took a similar approach during the Kaikōura earthquake, with semen straws successfully flown to affected farms.

The company dispatches and delivers around 5 million fresh semen straws and 1m frozen semen straws each year from September through to Christmas.